Insurrection : A Novel of Historical Fiction by Pierre Turgeon 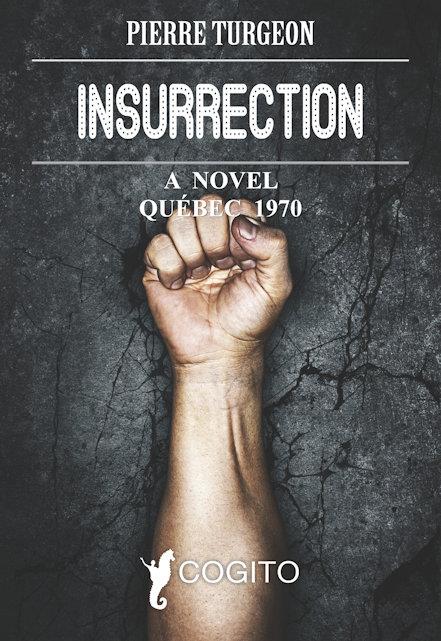 The story of Insurrection! begins in June 1968 and ends in the winter of 1970. The action takes place in Quebec, often in Montreal, but also in those other places where the fate of October was prepared and played out. For it is the October Crisis and the events that prepared for it that Pierre Turgeon has staged in this surprising novel where all the characters of this incredible outfit come to life. And they are all there: the hunters, the victims, the hunted, the witnesses. With a rare talent and using the daring freedom of the novelist, Pierre Turgeon has created characters based on the real people who made October. While the writer does not claim to compete in any way with the objective truth of the historian, he makes a vow of fidelity to the truth of the human being and his time. This truthfulness of heart and time animates each page of Insurrection!  and the reader is soon swept away in this fantastic whirlwind of passions. Insurrection! is made of love, rage, pride, courage, fear, and compassion too. It has the color of the days and the smell of the late seventies. It is woven of all those little things that make life and history…

A Novel
by Pierre Turgeon

Sitting alone in the basement staircase, the observer wondered when the others would come out of their hole. He was still amazed that the independence fighters had chosen him to ensure their safety at the time of their surrender. For, in spite of his sovereigntist’s convictions, he had always severely condemned the use of violence. This physician of the poor, also a novelist and pamphleteer, believed in the goodness and pacifism of his people, who, in order to represent themselves, in the face of the American eagle and the British lion, had chosen the iconic figure of the sheep.

Obsessed with the revolutionary wars in Vietnam and Algeria, these young people, he thought, had wanted to become wolves. To defend their people and liberate them. But they had only succeeded in becoming strangers in the eyes of their own, who preferred to continue to advance at the pace of sheep. And the old writer believed that one day men would end up living in peace, and he told himself that ultimately the future would belong to the sheep. Not to wolves.

A voice came from behind the boiler.
– Doctor, are you alone?
– Yes. Don’t worry about anything. There are also journalists waiting, outside.

Someone shouted, and the doctor heard a concrete block being lifted and then pushed against the cellar floor.

An almost blind, muddy colossus came forward under the bare light bulb that hung from the ceiling. In spite of himself, the observer could not help feeling that he who thus arose from the depths of the earth was obeying a primary and uncontrollable force. It also appeared to him that the young man, as well as his two comrades who had just emerged behind him, were on the verge of collapse. None of them had probably eaten in a long time.

When they went out into the open air, and the reverberating sun on the snow forced them to close their eyes, the doctor was surprised to find that they were able to straighten to their full stature and that in the end, it was with a fist raised in defiance that they walked on their own to the cell van, without any of the policemen pushing, or even touching them.

Paul, the leader of the Liberation cell, had never felt such relief as at the time of his arrest.

Born in Quebec, October 9, 1947 – The novelist and essayist Pierre Turgeon obtained a Bachelor of Arts in 1967. In 1969, at the age of twenty-two, already a journalist at Perspectives and literary critic at Radio-Canada, Pierre Turgeon creates the literary review L’Illettré with Victor-Lévy Beaulieu. The same year, he published his first novel, Sweet Poison. Several works followed 22 titles in total: novels, essays, plays, film scripts, and historical works. These include The First Person and The Radissonia, both of which win the Governor General’s Award for novel and essay respectively.

In 1975, he founded the Quinze publishing house, which he chaired until 1978. There he published numerous authors, including Marie-Claire Blais, Gérard Bessette, Jacques Godbout, Yves Thériault, Jacques Hébert, and Hubert Aquin, before becoming deputy director of the Presses of the University of Montreal (PUM) in 1978. Then, from 1979 to 1982, he directed the editions of the Sogides group, the most important French-language publisher in America. (Les Éditions de l’Homme, Le Jour, Les Quinze). He also publishes software, launching one of the first French text editors (Ultratexte) and the first French spell-checking program (Hugo). Editor-in-chief of the literary review Liberté from 1987 to 1998, he edited controversial issues on the October Crisis and the Oka Crisis, as well as on various political and cultural subjects.

In 1999, he created Trait d’union, a publishing house devoted to poetry, essays, and celebrity biographies, works signed among others by René Lévesque, Pierre Godin, Micheline Lachance, Margaret Atwood. He is the only Canadian publisher to have seen one of his books, a biography of Michael Jackson : Unmasked, reach number one on the New York Times bestseller list. In the meantime, the author continues to be prolific, and in 2000, he published a history of Canada, in collaboration with Don Gilmor, that won the Ex-Libris prize, awarded by the Association of Canadian Booksellers with the mention of Best History of Canada to date.

Today, he is working on the creation of a publishing site entirely devoted to the distribution of English and French eBooks: Cogito, which will go live in early 2021.

The book is strikingly true to the facts and is an exemplary success on the reader’s imagination. Here is what we could call the real October novel – Jean Royer, Le Devoir.

Of all the novels that deal with the October crisis, Pierre Turgeon’s is the one that embraces the broadest and most closely encircles the documentary reality. It is a remarkable and necessary novel. – Jean-Roch Boivin, Voir.