What is a Book? 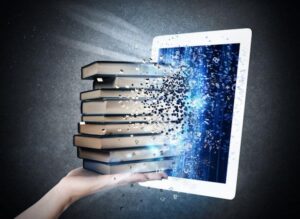 What is a book? Over fifty years ago, the answer seemed obvious: words printed on glue-bound sheets of paper. Then an idea came up: what if we replaced the ink with pixels on the surface of a small flat screen? People shouted sacrilege. If this whim ever came true, it would be the end of reading, the triumph of the image, and the TV. I never believed in this catastrophic vision. I worked long enough in traditional publishing to know to what extent paper, its transport, and printing costs, were complicating the expansion of literature. How do you get from Paris to a Seoul bookstore without charging the Korean buyer an exorbitant price?

Electronic bookstores solved what seemed to be an inextricable problem in one fell swoop. Wherever they are in the world, readers with Internet access can download a book in a matter of seconds without shipping fees and dropping manufacturing costs dramatically. The result is to intensify the exchange of books, ideas, and information. This commerce should be free of any political, religious, and ideological constraints unless it propagates hate and limits freedom of thought.

Hence the founding idea of Cogito: to allow the distribution of English and French works on the same platform. Why privileges these languages? Because we master and love both languages. Because our authors thus benefit from a potential pool of 635 million English and French-speaking readers. Great multilingual writers have thus written their works in several idioms. Think of Nabokov, author of Lolita, who went from Russian to German and then to English. To Samuel Beckett, who gave up English for French. To Kundera, who switched from Czech to French.

And why one day, with the help of Artificial Intelligence, could we not translate our authors into a language they cherish? Because behind the words, there is meaning. Where in principle, all human beings can come together. Where everyone can understand each other despite and because of the Tower of Babel.