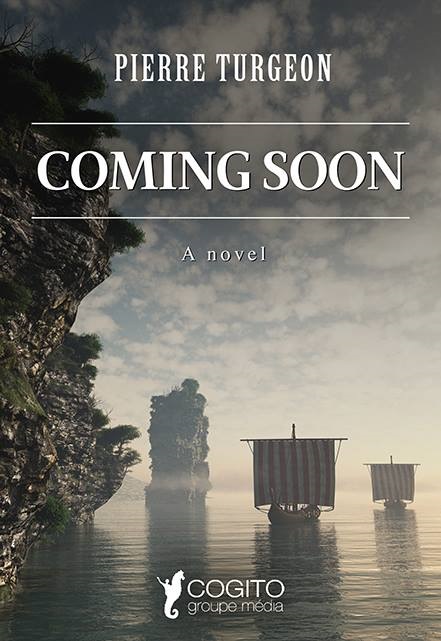 A war film is gradually being made in the streets of Montreal. But is it really a movie? An investigation is organized on three missing persons: the first, whose death is projected daily on the screen of the Commodore in Cartierville; the second, discoverer of America, murdered on a beach in Sept-Îles; and finally, a filmmaker who dreamed of a revolutionary film without tricks. These characters have decided to make their death so obvious that it will mark the memory of the world. The expression “enigmatic novel” takes on its full meaning with this live performance.

A Novel
by Pierre Turgeon

Jack takes a mint from the saucer beside the cash, then crosses the street and enters the movie house. A padded wall of imitation leather, surmounted by velvet curtains, separates the lobby from the auditorium. He climbs the stairway. In the mirror covering the wall at the top of the stairs, he watches his reflection approach him, like a tilt shot taken with a zoom lens.

The heroine of the film is weeping. “Erik is dead,” she says over and over. Jack knows the scene by heart: a black pigeon has settled on one of the fortress’ towers, provoking Brünnhilde’s grief; this, the prearranged signal that Erik the Viking has fallen upon misfortune. But how could this bird have covered the distance between America and Norway in a single night? How could you kill yourself so rapidly that the reflection of the act would be delayed to the point that you would not observe yourself die?

His torso bare, Jack rewinds the second reel of the feature-length film by hand, while in the other projector the final reel slowly unwinds. Wiping his face with his shirt, he raises the volume of the cabin’s loudspeaker and leans toward one of the windows. He is watching this film for the tenth time, a repetition that deprives the scenes–skulls staved in with axes, kisses exchanged in the light of the setting sun–of all dramatic or narrative value, purifying the universe before consigning it, when the lights are turned on in the cinema, to the empty expanse of a bare white screen, 1000 square feet in size.

Unknotting her blond braids, Brünnhilde leans out of an aperture in the tower, high above the glittering ocean that stretches between the dark bands of sky and cliff. “Are you still thinking of him?” murmurs her maidservant, who is preparing her mistress’ bed. Meanwhile, far away, in a gulf of what will one day be known as America, Erik stands on the narrow prow of his drakkar and addresses his oarsmen: “We have found neither gold nor cattle here, but only tribes of hostile people. I propose that we leave to others, more numerous or more insane than we, the business of settling this land.” The Vikings strike their shields with the flat of their swords as a sign of assent. Now, Erik will return to Norway, to Brünnhilde, and will punish the traitor by hurling him over the cliff.

Born in Quebec, October 9, 1947 – The novelist and essayist Pierre Turgeon obtained a Bachelor of Arts in 1967. In 1969, at the age of twenty-two, already a journalist at Perspectives and literary critic at Radio-Canada, Pierre Turgeon creates the literary review L’Illettré with Victor-Lévy Beaulieu. The same year, he published his first novel, Sweet Poison. Several works followed 22 titles in total: novels, essays, plays, film scripts, and historical works. These include The First Person and The Radissonie, both of which win the Governor General’s Award for novel and essay respectively.

In 1975, he founded the Quinze publishing house, which he chaired until 1978. There he published numerous authors, including Marie-Claire Blais, Gérard Bessette, Jacques Godbout, Yves Thériault, Jacques Hébert, and Hubert Aquin, before becoming deputy director of the Presses of the University of Montreal (PUM) in 1978. Then, from 1979 to 1982, he directed the editions of the Sogides group, the most important French-language publisher in America. (Les Éditions de l’Homme, Le Jour, Les Quinze). He also publishes software, launching one of the first French text editors (Ultratexte) and the first French spell-checking program (Hugo). Editor-in-chief of the literary review Liberté from 1987 to 1998, he edited controversial issues on the October Crisis and the Oka Crisis, as well as on various political and cultural subjects.

In 1999, he created Trait d’union, a publishing house devoted to poetry, essays, and celebrity biographies, works signed among others by René Lévesque, Pierre Godin, Micheline Lachance, Margaret Atwood. He is the only Canadian publisher to have seen one of his books, a biography of Michael Jackson : Unmasked, reach number one on the New York Times bestseller list. In the meantime, the author continues to be prolific, and in 2000, he published a history of Canada, in collaboration with Don Gilmor, that won the Ex-Libris prize, awarded by the Association of Canadian Booksellers with the mention of Best History of Canada to date.

Today, he is working on the creation of a publishing site entirely devoted to the distribution of English and French eBooks: Cogito, which will go live in early 2021.

Never will one have read a book as violent and as restrained… In a classic prose because it alone allowed him to play, Turgeon lies from the first to the last page, pretends to look for the assassin he knows well because he is in each one of us like the smothered and drowned violence of our taverns.  – Jacques Godbout, L’actualité.