The Killing of Anna Nicole Smith: A Biography by Larry Seidlin 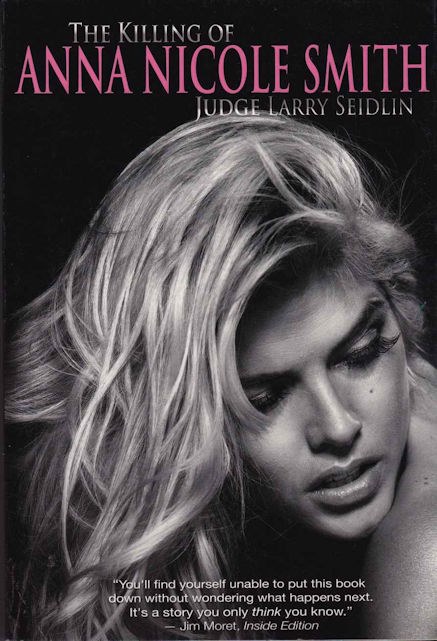 Anna Nicole Smith first became famous as the 1993 Playboy Playmate of the Year. She later married octogenarian billionaire J. Howard Marshall, 63 years her senior. When he died without naming her in his will, Smith sued to inherit, alleging Marshall had promised her half his fortune, or $800 million. From then on her life was lived out in the tabloids as the public followed her court cases, wildly fluctuating weight, and all-too-obvious substance abuse. Marshall’s family fought her claim. In a complex series of legal twists and turns, the case reached the U.S. Supreme Court, which in May 2006 affirmed Smith’s right to sue.

In The Killing of Anna Nicole Smith, his first book, retired judge Larry Seidlin unveils the truth behind one of the most-watched courtroom proceedings in television history. Based on eyewitness accounts, trial transcripts, and confidential files, his three-year, in-depth investigation reveals what really happened to Anna Nicole Smith.

The Killing Of Anna Nicole Smith

A Biography
by Larry Seidlin

On March 18, 2008, Howard K. Stern faces the Bahamian inquest. At the offset, when he is asked by chief examiner Brathwaite where he currently resided, Stern answered “Where do I live at present? I live in Los Angeles, CA, in (a) suburb called Sherman Oaks.”

This line by Howard K. Stern disappoints me. Anna Nicole and Danny are alone in the Bahamas. He wasted no time in relocating to Los
Angeles. This further convinces me that Anna Nicole and Stern going to the Bahamas was just a rouge, was an effort to avoid all the issues concerning the paternity of Dannielynn. Not her intent to live in the Bahamas permanently. Is fame and fortune calling everyone away from the Bahamas? Wouldn’t this call be heard by Anna if she was alive? It’s obvious that her intent was to return to Hollywood. She was born to be a star and there is no way in hell she would have avoided the limelight for an extended period of time. No wonder the ghosts keep knocking at my door.

Her soul and Danny’s soul need to be placed on sacred ground in the Lone Star state with people that grew up with her and loved her in her simpler days. Every child is a star for their parents, family, and friends. The

Hollywood star just has a bigger stage for adulation, exposure and enabling. Give the star the cash cow, all the candy they want to eat. That cow will never reach the proper retirement age. But in Anna Nicole’s case, like Michael Jackson, there are still great sums of money to be made from their work, from their image and their likeness. And in Anna Nicole’s case, there is a lot of dough still brewing, cooking in the J. Howard Marshall estate, of which Anna was awarded hundreds of millions of dollars from the estate by a Los Angeles federal court, and was later reduced to zero by a federal appeals court.

Anna Nicole, like Michael Jackson, could be worth more dead than alive. The stars are no longer spending any money, they are dead. Plus no one must deal with their eccentricities. Now there’s only the goose laying the golden eggs. Money, money, money, and more money. As in the Michael Jackson case, look how vital the executors play for Michael Jackson’s estate. They control great power and money and are rewarded handsomely in fees and expenses. People don’t realize that you don’t have to be placed in a will as a beneficiary, in order to receive enormous sums of money. You are entitled to a percentage of the estate as the executor, and you may be additionally compensated if you are the attorney overseeing the estate.

Retired Judge Larry Seidlin is a man of perseverance devoted to serving justice. In 1978, at the age of 28, he became the youngest person elected as a judge. He won professional awards including Judge of the Year Crimestoppers. Judge Seidlin is a popular lecturer in many U.S. colleges and offers his judicial knowledge and opinions on many TV shows.

Anna Nicole Smith was known as much for her sometimes-turbulent life off-camera as she was for her tabloid celebrity.

These new revelations come from a man who personally witnessed and participated in this tragic story, and whose legal decisions sought to bring justice.

“You’ll find unable to put this book down without wondering what happens next. It’s a story you only think you know.” Jim Moret, Inside edition.