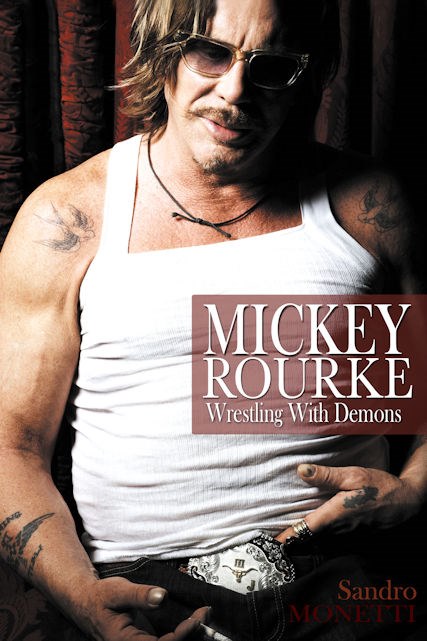 In 1991, Rourke decided to go back to his first love: boxing. During his boxing career, he suffered a number of injuries that resulted in a dramatic physical change. Too beaten-up to carry on boxing, Mickey tried to make a return to movies, but only found work in a succession of low budget, low quality flops. What was Rourke’s problem? What personal demons drove him to sabotage his acting career, drawing him steadily down into his own private hell?

Mickey Rourke: Wrestling with Demons chronicles the star’s extraordinary adventure through life, from his nightmare childhood, broken marriages, arrests, and brain damage to a suicidal visit to a New York Church, the death of his brother in his arms, and to his Academy Award nomination for The Wrestler. Written with passion, insight, and expertise by respected show business reporter, Sandro Monetti, this is a very human and compelling story.

A Biography
by Sandro Monetti

Desperate, broken down, and battered by setbacks, Mickey Rourke slumped to his knees in a New York church and prayed to a wooden sculpture of St Jude for the strength to stop himself doing what he was about to do.

He had come to 42nd Street’s Church of the Holy Cross one damp, dreadful day in the mid-1990s feeling at his lowest ebb and looking for guidance from, appropriately, the patron saint of lost causes. Now, with his acting career all washed up, his money gone, and his wife, Carré Otis, walking out on him, Mickey was tormented by both suicidal and murderous thoughts.

He had a pistol in his pocket and a revenge plan in mind to do some serious harm to a man he says attacked his estranged wife. And, after that, he’d maybe turn the gun on himself.

The pain in his head felt unbearable as he reflected on the mess his life had become and how he had driven away the beautiful woman he loved so much. From his other pocket, Mickey took a handwritten letter of apology he had written to Carré. Reading the sad note over and over again, he wondered if these would be the last words he would ever write.

Sandro Monetti is one of the world’s most experienced and respected show business writers. This British-born journalist covers the Hollywood scene for the international press. During a 20year career, he has worked for major media organizations such as the BBC, Sky TV, News of the World, The Daily Express, and The Daily Telegraph.

You will not be able to put this book down. What a story. A real (Modern day Pirate) Nothing is impossible if you live with this guys attitude and out look. He is afraid of no one and he lacks the filter that most of us have. (If Mickey thinks it, he says it) on the other hand most of us have thoughts at times that we know we should keep to our selfs, and we do. (Thank god) He had some crazy jobs when he was young and had a very troubled child hood. He has made a comeback, and Im proud of him for that, and you will be too, if you read this book.Very well written by the author Sandro Monetti, who has covered the Hollywood scene for about twenty years. Honestly, Im glad Mickey isn’t in prison. He really could of gone either way… – Reviewed in the United States on May 25, 2014

This book dispels some myths about the man, the facts Rourke has revealed about his background and what his family says was the truth. It’s amazing how whittled down some of the details of Rourke’s life appears on the internet and this book gives some new insights. One bonus for actors, revealed are some subtle tricks on how Rourke has created some mind-blowing, scene-stealing, characters and also for some roles, has created that dynamic detachment. For those secrets alone, makes this book priceless for actors. Rourke went to the Actor’s Playhouse (Same place De Niro, Keitel and Pacino went to), but to make the audition, he hired acting teacher Sandra Seacat. If you’re a Rourke fan, until Mickey pens his own book, this is about the closest we’re going to get to one of Hollywood’s finest. -Reviewed in the United States on May 11, 2011

Gotta love him for who he is. I’ve met Mickey Rourke….more than once. If I did’t know better, I’d swear he was a biker…very tough and scary on the outside, yet wanting to be loved very much on the inside. That’s who Mickey Rourke reminds me of–a tough person because he’s afraid to show his gentle side. He really made points with me when I read how he fell in love with his co-star parrot in Iron Man 2. It’s very hard to love a parrot. He obviously relates to them. It takes a special person to love the bigger birds. I also read Carre Otis book and do believe their relationship was based on sexual attraction, yet neither understood each other and couldn’t be life partners no matter how hard they tried. -Reviewed in the United States on September 3, 2012

mickey rourke in my opinion has always been very underrated. he’s the 1 guy I always respected because he comes with no bull#$^$ attitude, and gave respect when it was due or earned. this book tells his complete background from the good to the very bad parts of his life. how he started out, also how he lost everything. a very interesting read and a page turner for sure. mickey rourke will always be the original bad ass in my opinion! -Reviewed in the United States on May 15, 2014

i got this book about 2 weeks ago and i had it finished in 2 days. it is a good read. if you are a fan of mickey rourke i highly encourage you to buy this. i didn’t want to put the book down, but i have to work and make a pay check to buy things on amazon. most definately one of the best bio’s i have read in a long time. but i hope an updated bio on mickey comes out soon. just love that guy!! -Reviewed in the United States on January 17, 2013

Mickey Rourke: Wrestling with Demons remains one of only two major Rourke biographies available in the U.S.